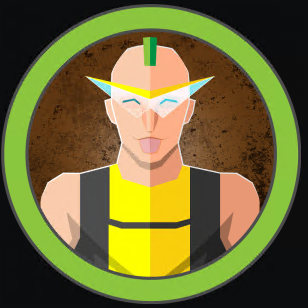 There’s only an image and a simple text talking about IRC. There’s no other links and no robots.txt. I then run a gobuster scan but does not return any additional webpage of interest.

There’s not much else to check so I check to see if there’s any vulnerability in unrealIRCd.

There’s a Backdoor Command Execution exploit available in Metasploit for UnrealIRCd version 3.2.8.1. Let’s give it a try.

Let’s do some poking around the /home folder. User ircd does not have any files of interest. But there’s a file .backup that looks interesting under user djmardov’s Documents folder:

Unfortunately, that doesn’t work. Let’s examine the .backup file again. There was a sentence ‘Super elite steg backup pw’. The word steg could potentially mean the password is hidden using some steganography technique.

Recalling there is an unhappy smiley face in the website. Let’s download it and see if any information is hidden in there using command steghide:

That is! We get in as djmardov! And we get the user.txt!

The command viewuser looks interesting. Let’s try to run it:

It does not result in root account but it shows the the execution looks for a file /tmp/listusers. Let’s copy command dash to it and try again:

Thank you for the box Irked, MrAgent!

My journey to pass OSCP in 3 months

My journey into ethical hacking