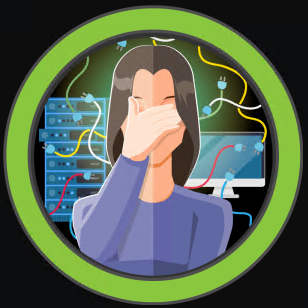 Blunder is a retired vulnerable Linux machine available from HackTheBox. The machine maker is egotisticalSW, thank you. It has an Easy difficulty with a rating of 4.1 out of 10.

Kali Linux is used to carry out the enumeration, exploitation and privilege escalation. No automated tools are needed. The goal is to obtain root shell together with both user & root flags.

Only port 80 is open. That’s a website. Let’s check out the home page.

Looks like it’s a CMS (Content Management System) hosting a few posts and an About page. There aren’t additional information from the other pages. When checking the source of the home page, it shows version of 3.9.2. But what CMS software is unknown yet.

Let’s do a directory scan using gobuster to see if there’s any other interesting webpage or folders:

There is a user named fergus that maybe useful later. Let’s continue with /admin for now

Ok, it’s using a CMS software called Bludit. I check with Google to see if there’s any default credentials. It seems like admin is the default user but there is no default password. So I did some password guessing:

Noop. No luck. And after about 10 trials, my IP address is blocked. Great.

Let’s do some more searches to see if there’s any exploits available:

Find an exploit that can perform directory traversal and upload PHP payload. However, this exploit requires authentication. So I need to find some credentials to login first.

Further googling helps me land on another exploit that can bypass brute force protection. That is, I can bypass the IP address lock out:

Sounds like a good path. If I can bypass lock out protection and brute force to find valid credentials, then the credentials can be used in the first exploit found to get an initial foothold.

I perform some more google search and find a python script that exploits the brute force protection.

Downloaded bruteforce.py and see how it works:

It’s pretty straight forward by providing the IP address, username and a wordlist. I used the script bruteforce.py to perform dictionary attack using rockyou.txt on user admin & fergus. It took quite a while and didn’t find the password.

I then use cewl to screen-scrape the website to obtain a custom wordlist.

Now let’s go back to the first exploit. Using searchsploit I am able to find the exploit script.

I make a copy of 48701.txt. It’s essentially a python script so simply rename it to 48701.py. Note, there’s a Metasploit exploit too but this guide will be using the python exploit.

Looking at the python script, there is a few things to prepare before executing the script:

Now time to execute the exploit:

Looking good. Hopefully, the payloads are uploaded to the victim machine.

Quick browse under /home shows that user.txt is at /home/hugo/user.txt. That probably means we want to gain access as hugo.

Keep that in mind and let’s start enumeration of the system. After some browsing around, I find a file /var/www/bludit-3.9.2/bl-content/databases/users.php containing credentials for admin & fergus.

Unfortunately, those are not for hugo and password hashes are salted. These hashes may not be the best target to try cracking them for now. Let’s continue the enumeration because I remember the system has a folder of newer version of Bludit. Maybe it has something similar:

His password hash does not use salt. That’s even better. The hash contains 40 hex characters which translate to 160 bits. So most likely it’s a SHA1 hash.

I use md5decrypt.net to try decrypting the hash:

Lucky we! Password decrypted and we have hugo’s credentials now:

Let’s try to login as hugo:

Success! We login as hugo! Let’s grab the flag quickly.

Let’s do enumeration. One classic check is sudo -l

Nice, hugo can execute bash as any other users except root.